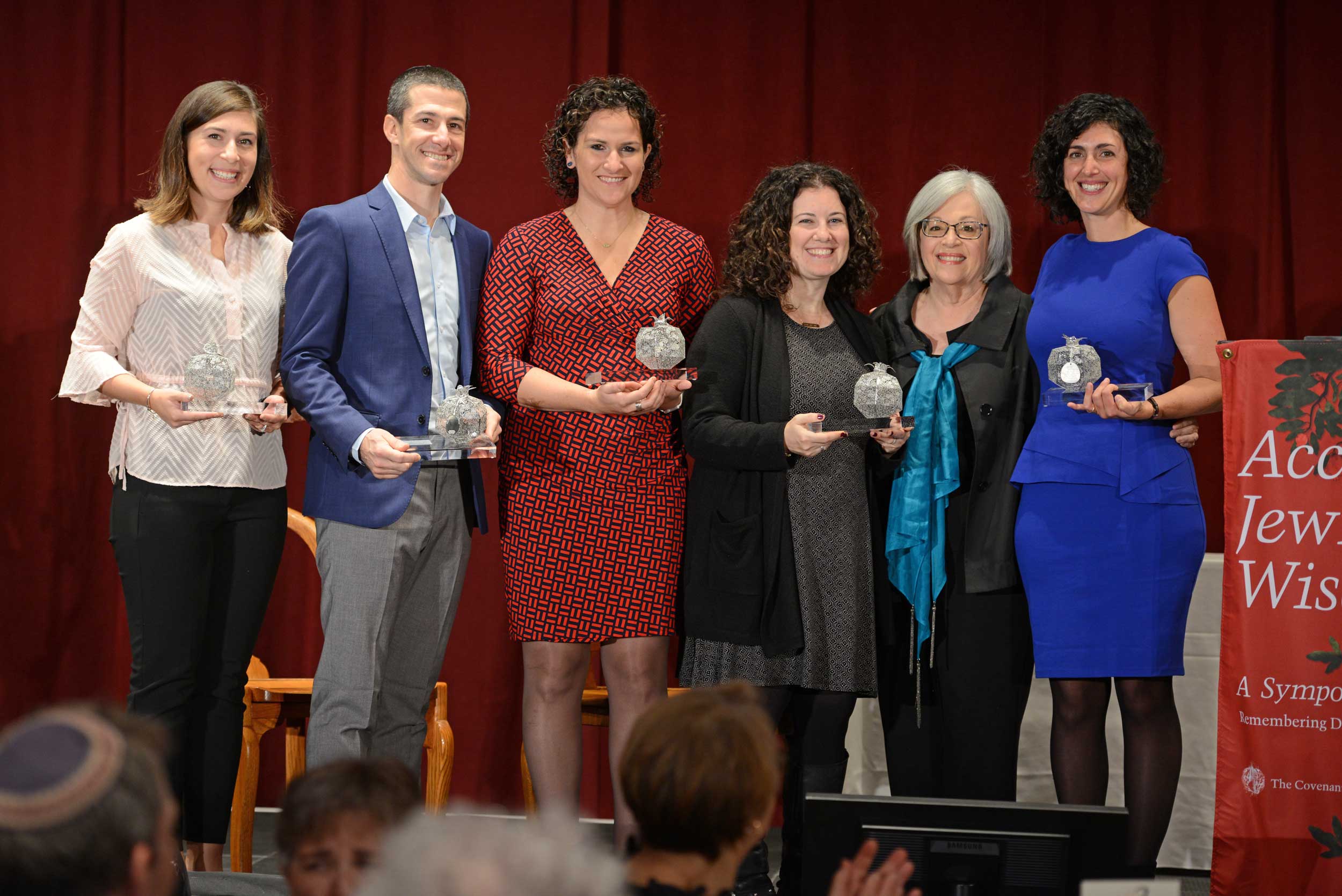 The Pomegranate Prize, inaugurated in 2011, is designed to honor rising leaders who have been in the field of Jewish education for up to ten years. By encouraging Prize recipients in their pursuits, and enabling them to accelerate their professional development and amplify their impact on the field, The Covenant Foundation aims to nurture Pomegranate Prize recipients in an intentional way, and empower them to take risks and make a difference in the field of Jewish education.

Five educators join the Pomegranate Prize cohort each year. Over a three-year period, the recipients have multiple opportunities to connect with thought leaders and extraordinary educators from across the spectrum of Jewish life.

The Prize stands next to The Covenant Award, which since 1991 has honored three exemplary Jewish educators each year for innovation and impact across Jewish education settings.

“These five educators not only inspire us with their remarkable passion, but also, they give us hope,” said Cheryl R. Finkel, Board Chair of The Covenant Foundation, as she presented the Prize. “Now more than ever, it is essential that every Jewish place of learning is filled with the creativity, genuine enthusiasm and commitment to social change that these educators bring to their work. We are so thrilled to welcome them to an ever-growing roster of outstanding practitioners.”

This year the Pomegranate Prize ceremony was followed by a Symposium in memory of Dr. Jonathan S. Woocher, z”l, presented in partnership with The Jewish Theological Seminary. The keynote presentation, a conversation between Dr. Arnold M. Eisen, Chancellor of JTS and Krista Tippett, author, broadcaster, creator and producer of the public radio program On Being, was followed by a series of panels on the topic of Jewish wisdom.

“Each year, we watch excitedly as productive connections form amongst the remarkable educators in the Pomegranate Prize cohort,” said Harlene Appelman, Executive Director of The Covenant Foundation, who offered a greeting to the audience this morning. “In a time of tremendous uncertainty, it is so heartening to know that these talented, committed and truly creative thinkers are leading the charge toward ever innovating the field and continuing the legacy of the good work started by so many in this room today.”

Rabbi Adina Allen is Co-Founder and Creative Director of The Jewish Studio Project (JSP) in Berkeley, California. Innovating a new Jewish learning environment – part beit midrash, part urban art studio, and part spiritual community – JSP utilizes the expressive arts as a tool for self-discovery, social change, and inspiring a Judaism that is vibrant, connective, and hopeful. Integrating a lifetime of experience in the expressive arts with her rabbinic training, Adina has pioneered a methodology for the integration of Jewish learning, spiritual reflection, and creative expression. Her original research on art making as a methodology for generating new midrash was published in the CCAR Journal in 2012. A contributing writer to the Huffington Post, Patheos, and My Jewish Learning, her work has been published widely. Adina was ordained by Hebrew College in 2014 where she was a Wexner Graduate Fellow.

Maiya Chard-Yaron joined the Texas Hillel team in Austin as Executive Director in 2017. She works closely with students, staff, and the broader community to advance Hillel’s work on campus and to inspire every Jewish student to create an enduring commitment to Jewish life, learning, and Israel. Previously, Maiya spent five years with Maryland Hillel as Assistant Director and Director of Educational Engagement and also served as Program Director at Hillel at Davis and Sacramento. She competed for the Israeli national softball team from 2003-2013, traveling to six different countries representing Israel on the diamond. Maiya has been an educator at both Camp Alonim and Camp Ramah and has been a part of leading over 15 educational student trips in Israel, Poland, and throughout the US. Maiya holds a Master’s degree in Experiential Jewish Education from The Jewish Theological Seminary of America.

Ilana Gleicher-Bloom is the founding Vision Director of Mensch Academy at Mishkan Chicago. She spent a year learning Torah at Midreshet Lindenbaum in Jerusalem, before starting at Brandeis University, where she graduated with a BA in both Near Eastern and Judaic Studies and English and American Literature. Ilana spent three more years living and studying in Jerusalem, where she was a Pardes Fellow at the Pardes Institute, and a member of the inaugural cohort of the Melamdim Teacher Education Program at the Shalom Hartman Institute and Tel Aviv University. Before launching Mensch Academy, Ilana taught Talmud and Tanakh at Rochelle Zell Jewish High School in Deerfield, IL, and at the Heschel High School in New York City. She also taught Judaic Studies at the Alexander Muss High School in Israel, Tichon Ramah Yerushalayim, and the Beit Midrash Program at Camp Ramah in Wisconsin.

Oren Kaunfer is Madrich Ruchani (Spiritual Educator/Director of Jewish Life) at JCDS, Boston’s Jewish Community Day School. Drawing on a diverse background ranging from Camp Ramah to the Carlebach Shul to MTV, Oren is a fresh voice of Jewish spirit. He is particularly interested in creating innovative and engaging t’fillah, and fostering meaningful connections to the Jewish experience. At JCDS, he develops and executes all-school chagigot (holiday celebrations), oversees t’fillah for all grades K-8, works closely with the school-wide Pluralism Committee, and leads the Jewish Life Team. Oren aims to bring the essence of Jewish summer camp to the school environment. His creativity, energy, and spirit elevate and energize the community, and infuse JCDS with genuine ruach.

Hannah Kearney is the Director of Havayah, The Teen Community at Temple Beth Elohim in Wellesley, MA. Throughout her eight years at TBE, she has served in a variety of roles in education and youth engagement, and currently works with the TBE Youth Team and Havayah Manhigut (teen leadership) to coordinate meaningful programming for the 8th-12th grade community. After high school, Hannah spent a year volunteering and studying in Jerusalem, Israel with the Bronfman Youth Fellowship, followed by her time at Brandeis University where she studied Studio Art and Sociology. In 2014, Hannah completed the Certificate in Jewish Education Specializing in Adolescents and Emerging Adults through Hebrew Union College-Jewish Institute of Religion. She is a visual artist specializing in painting, and one of her core passions is the confluence of Judaism and art.