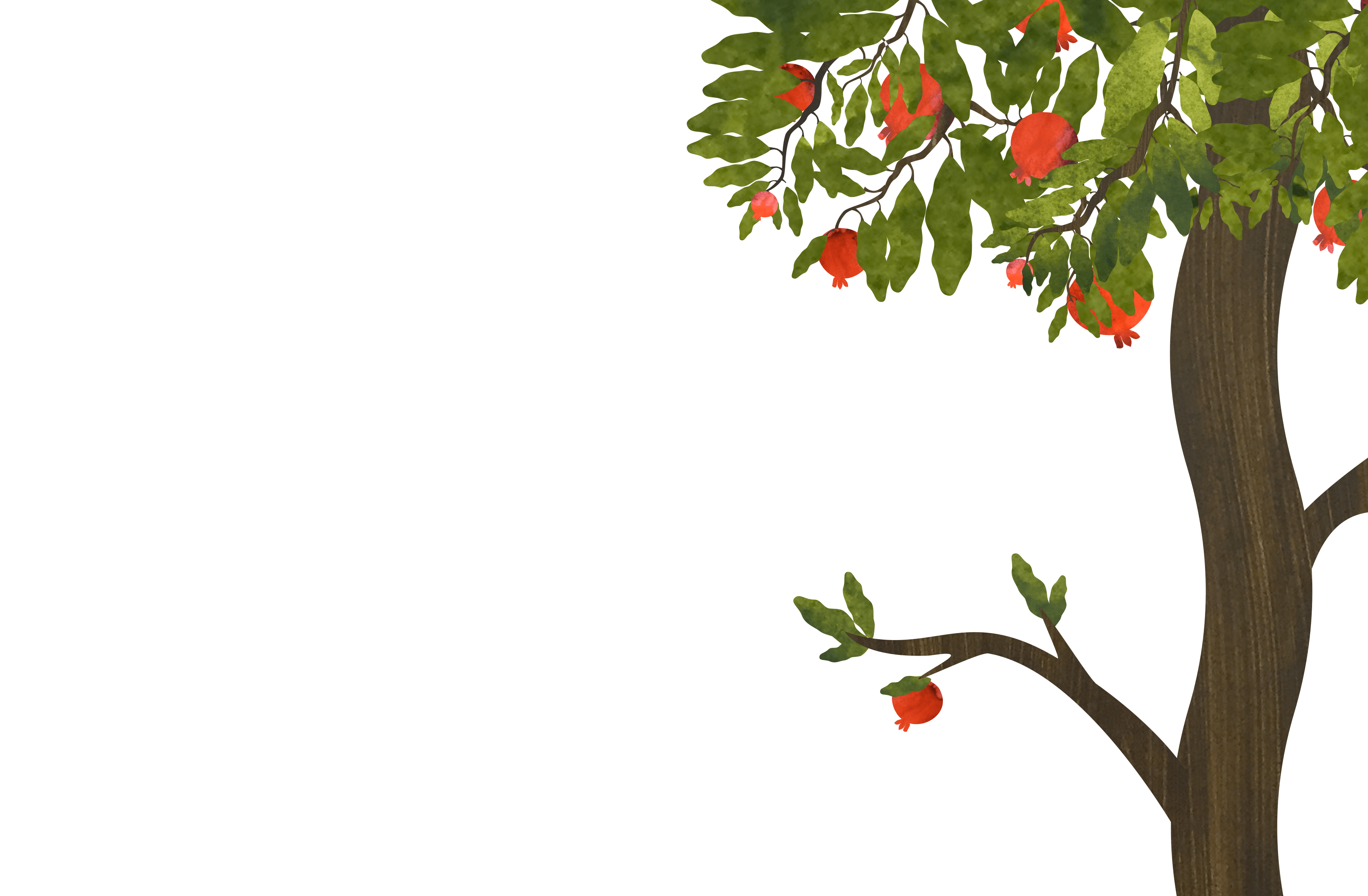 Sowing the seeds for the next generation of Jewish educators

The Pomegranate Prize is designed to recognize emerging leaders in the field of Jewish education by encouraging them in their pursuits and offering the resources and connections necessary to accelerate their development, deepen their self-awareness, and amplify their impact on the field.

Through a variety of programs and activities, Pomegranate Prize recipients have the opportunity to work with creative leaders in Jewish education, thereby deepening the field’s “bench” of transformative practitioner-activists and reinforcing those uncommon connections among Jewish educational leaders that The Covenant Foundation seeks to create and nurture.

In addition, recipients form a cohort that grows as the Prize is awarded to more educators, learning together at gatherings sponsored by the Foundation over a period of three years. The $15,000 attached to each Pomegranate Prize constitutes a fund to help recipients pursue their professional dreams.

Through the creation of this Prize, The Covenant Foundation seeks to capture the passion that comes with new experience, to nurture new leadership for the field in an intentional way, and to enable emerging educators to take risks and make a difference.

Welcome & PRESENTATION OF THE 2021 POMEGRANATE PRIZES

Cheryl R. Finkel, Chair of the Board
The Covenant Foundation

Reflections of a partnership

What’s in a name

Life is in the Transitions

Rabbi Tiferet Berenbaum is the Rabbi of Congregational Learning and Programming at Temple Beth Zion in Brookline, MA. Tiferet previously served as senior rabbi and education director at Congregation Shir Hadash in Milwaukee, WI, and at Temple Har Zion in Mt. Holly, NJ. She served on New Jersey Governor Phil Murphy’s Interfaith Clergy Council and was also invited to participate in a clergy blessing of Boston’s acting mayor, Kim Janey. In her multifaceted career, she has had a front seat at the intersection of race, gender, and religion. Tiferet earned her bachelor’s degree in Clinical Psychology and Judaic Studies from Tufts University, where she was also the recipient of the Joseph and Sara Stone Prize for demonstrating excellence in the field of Judaic Studies. She was ordained by Hebrew College, where she also earned a master’s degree in Jewish Education. She is currently pursuing a doctorate in Educational Leadership at Lesley University in Cambridge, MA.

Alana Rifkin Gelnick has been the Associate Principal of the Early Learning Center (ELC) at SAR Academy in Riverdale, NY since 2015. During her tenure at SAR, she has spearheaded a Hebrew Immersion Program for preschool classrooms and initiated the first Kindergarten inclusion class to address the needs of students with learning differences. In addition, she was at the helm of the construction of a 36,000 square foot new ELC building that opened in September 2020. Prior to her current role, Alana served as a reading specialist and an assistant teacher at SAR. She has written for The Jewish Link and was a guest speaker on the podcast Natural Pod Live. She also participated in leadership training with ELAI (Educational Leadership Advancement Initiative). Alana earned her B.A. in Political Science from Queens College and her master’s degree in General Education and Literacy from Bank Street College of Education. She completed coursework in Expository Writing through The Winward Institute, and holds New York State Certification in General Studies and Literacy.

Aryeh Laufer has been a member of the faculty of The Idea School in Tenafly, NJ since its inception and currently serves as Head of STEM. He previously served as Head of Engineering and the Inquiry Beit Midrash, and continues to create democratic and inquiry-centered learning spaces in which student voices and passions drive the learning process. As a self-taught programmer, Aryeh empowers students to create, play, and solve real-world problems with technology. He created and now facilitates The Idea School Makerspace, in which students engage in painting and drawing, clay sculpting, woodworking, 3D modeling and printing, digital design, coding, electrical engineering, and more. Aryeh believes a meaningful Judaism embraces questioning and is passionate about nurturing students’ natural curiosity through the rich texts and practices of Jewish tradition. Aryeh earned a B.A. in Psychology with a minor in Jewish Studies from Yeshiva University.

Rabbanit Leah Sarna is the Associate Director of Education and Director of High School Programs at the Drisha Institute for Jewish Education in Riverdale, NY. She previously served as Director of Religious Engagement at Anshe Sholom B’nai Israel Congregation in Chicago. Leah was a Wexner Graduate Fellow, an Oy!Chicago 36 Under 36 Honoree, and an inaugural member of the Jewish Women Scholars’ Writing Fellowship. Her published works have appeared in The Atlantic, The Washington Post, The Forward, Lehrhaus, 929 English, and My Jewish Learning. She has lectured in Orthodox synagogues and Jewish communal settings around the world and loves spreading her warm, energetic love for Torah and mitzvot with Jews in all stages of life. Leah was ordained at Yeshivat Maharat in 2018, holds a B.A. from Yale University in Philosophy and Psychology, and also trained at Drisha, Center for Modern Torah Leadership, and The Stella K. Abraham Beit Midrash for Women at Migdal Oz in Israel.

Tony J. Westbrook, Jr. is a Jewish African-American, activist, Jewish educator, and community leader based in St. Louis, MO. He is currently the Assistant Director of Hillel at Washington University in St. Louis. Tony also serves as a freelance Jewish life consultant and has facilitated racial justice and equity training sessions for BBYO, Base Hillel, Hillel International, and the Wexner Alumni Racial Justice Beit Midrash. He previously served as Director of Jewish Life for Capital Camps and Retreat Center in Waynesboro, PA. Tony produces digital Jewish content on Instagram and TikTok under the username @frumjewishblackboy and is currently working on a new series entitled “Tiyul with Tony.” When he's not teaching innovative Torah on social media or in person, he is working to address issues of racial inequality, discrimination, diversity, and inclusion throughout the St. Louis community. Tony earned his B.A. in Communication Studies from Fontbonne University in St. Louis, MO, and graduated from the Pardes Institute of Jewish Studies in Jerusalem with certificates in Judaic Studies and in Experiential Jewish Education.

Rabba Yaffa Epstein is the Director of the Wexner Heritage Program at the Wexner Foundation, where she oversees the development and curriculum for dynamic lay leaders throughout the United States and North America. She has also served as a faculty member for the Program since 2015. Previously, Yaffa served as the Director of Education, North America for the Pardes Institute of Jewish Studies. As a member of the faculty for Pardes, Yaffa taught Talmud, Jewish Law, and Liturgy. She has also taught at Yeshivat Maharat, The Drisha Institute, The Dorot Fellowship, The Wexner Heritage New Members Institute, Kayam Farm Kollel, and Young Judaea. Yaffa has lectured at Limmud Events around the world, has written curriculum for the Global Day of Jewish Learning, and has created innovative educational programming for Hillel: The Foundation for Jewish Campus Life. She received Rabbinic Ordination from Yeshivat Maharat and holds a law degree from Bar-Ilan University.

Bruce Feiler is one of America’s most popular voices on contemporary life. He is the author of seven New York Times bestsellers; the presenter of two primetime series on PBS; and the inspiration for the drama series Council of Dads on NBC. Bruce’s two TED Talks have been viewed more than two million times. His most recent book, Life Is in the Transitions: Mastering Change at Any Age, describes his journey across America, collecting hundreds of life stories, exploring how we can navigate the growing number of life transitions with great purpose and skill. For more than a decade, Bruce has explored the intersection of families, relationships, and well-being. Bruce is also the author of Walking the Bible, which describes his perilous 10,000-mile journey retracing the Five Books of Moses through the desert. The book was hailed as an “instant classic” by the Washington Post, spent a year and a half on the New York Times bestseller list, and has been translated into fifteen languages. Writer of the “This Life” column in the New York Times, he has written for numerous publications, including The New Yorker, Parade, and Gourmet, where he won three James Beard Awards.

Maya Bernstein is a Co-Director of the Certificate in Facilitation program at Georgetown University’s Institute for Transformational Leadership. She is also on faculty of the Masa Leadership Center in Jerusalem and Yeshivat Maharat, a women's rabbinical school in New York. Maya was a founding team member of UpStart Labs, which supports innovation in the nonprofit sector. Her writing on the topics of leadership, facilitation, and innovation have been published widely, including in the Stanford Social Innovation Review and the Harvard Business Review. Maya recently released her debut album, Shiviti, with Noah Solomon Chase, and her first collection of poetry is forthcoming from Ben Yehuda Press. She is a 2012 recipient of The Covenant Foundation’s Pomegranate Prize for emerging leaders in the field of Jewish education. She graduated from Columbia College, holds a master’s degree from Harvard’s Graduate School of Education, and is currently pursuing an MFA in Writing at Sarah Lawrence College in Bronxville, NY.

Noah Solomon Chase is a New York City-based singer and musician. He grew up in a small community in Israel founded by the late Rabbi Shlomo Carlebach. Noah was raised on Carlebach music and eventually performed with him both in Israel and New York. He is the creator and front man for two successful New York City bands, Soulfarm (a Rock/Mediterranean/Folk band) and Citigrass (an urban Bluegrass band). He has toured and performed extensively throughout the United States and internationally, including Europe, Australia, and Israel. Over the past few years, Noah has also been appearing in synagogues across the U.S. as a “cantor/musician in residence,” bringing ruach to congregations with his song leading and musical skills.